Play Spider Solitaire 4 Suits online for free. Challenge yourself with daily challenges and winnable deals. A feature-rich game with hints and undo's. 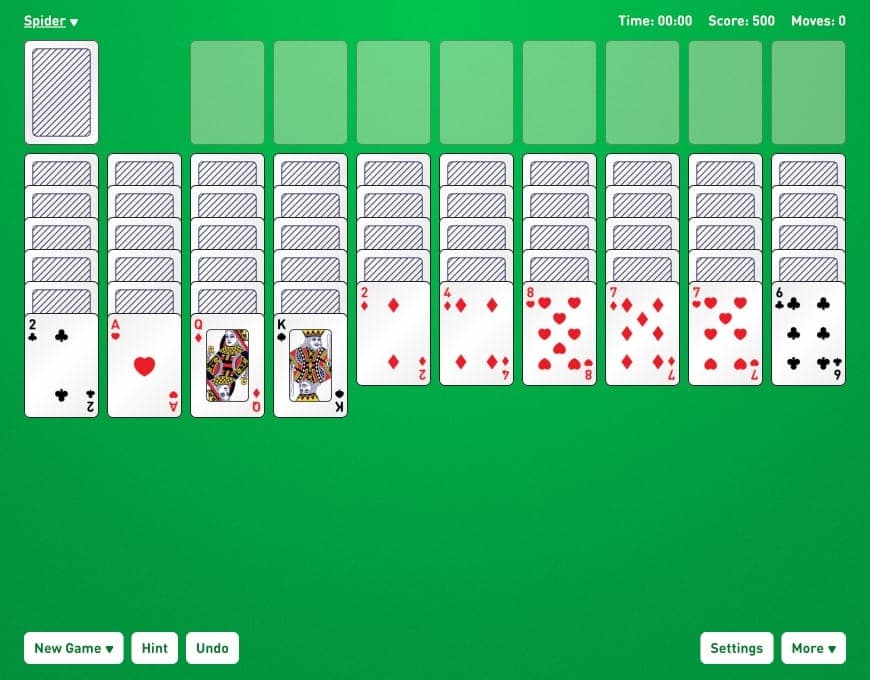 This game is the most difficult of all the Spider games. Only one deck is used in this version, but all four suits from that deck are in play, which is what makes this version so challenging.

If you like the gameplay of this game but find it too hard, we suggest that you give either out Classic Solitaire Game or our Free Cell Solitaire a try.

We keep our games updated based on feedback from our users, so feel free to contact us at contact@online-solitaire.com with any ideas or feedback. We last updated our site on January 10, 2023.

Love playing this game! Over the years, I have played 10s of thousands of solitare and this game is tops.

I play this game every morning. It helps gets my brain primed for the day.

Playing with four suits is the most difficult version of this game. When moving cards on the tableau, a card or sequence of cards can be moved on top of another card, so long as the card being moved is one higher than the card it's being moved to. This game is more difficult because sequences of cards can only be moved if they're of the same suit! So you'll often find yourself in a situation where you want to move a sequence of cards but can't it contains a single card of a different suit.

I love this app. My husband and I enjoy the daily challenge. It's a conversation piece for us.

I play it every morning as I'm relaxing or getting ready for work. It really relaxes me. Sometimes too much.

Our game has all features you could wish in such a game. You'll get unlimited gameplay, helpful hints, and much more. All of it is wrapped in a neat design that ensures optimal gameplay.

Undo As Much as You Want

In a game as hard as this, being able to undo moves is key. In our version, you can undo all the way back to the start of the game. You can either click the undo button or press [U] on your keyboard to undo.

Hints at Your Fingertips

We promise that you'll experience the feeling of being stuck in a game as hard as this. That's why we've created a feature that will give you a hint. Either click the button or press [H] on your keyboard to receive a hint.

We've taken the time to create an app with all of the games from our site. You can download solitaire to your computer for a smoother game experience.