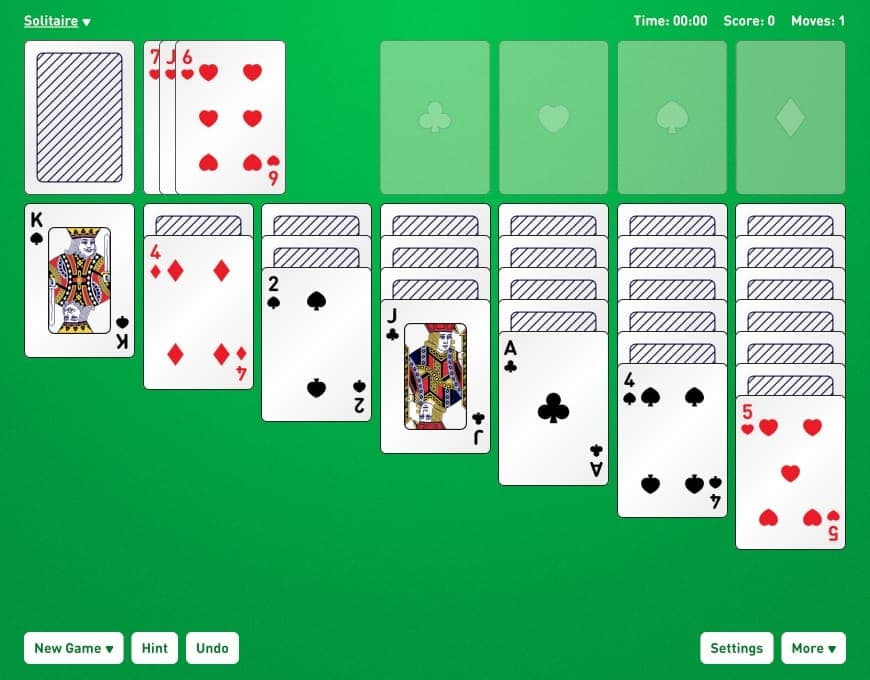 We've done our utmost to create a game with smooth gameplay, a modern design, and all the features you know and love from the classic game.

Play a winnable deal or challenge yourself with a random shuffle. Take part in our daily challenge to see if you can win every challenge of the month!

Our game contains unlimited free gameplays, undo's, and hints. You can toggle sound, set autoplay, turn three cards or turn one card at a time, change the design, and much more under settings.

We continuously update our site based on user feedback. The last update occurred on June 28, 2022.

Best game I've found. So much fun. It is the perfect difficulty for me!

A classic version of Patience with plenty of challenges and clues, but only if you need them.

To play Klondike, you need a standard deck containing 52 cards. If you're playing with a physical deck of cards, take out any jokers or instructional cards and shuffle the cards well.

If you're wondering how to play online, it's the same as how to play with real cards. You're now ready to learn the rules!

How To Set Up Solitaire

Step 1: To deal Klondike, you start by laying out seven cards from the deck. Layout the first card face up on your left-hand side. Next, place six cards face down on the right side of the initial card. You now have seven rows on which you'll build. These piles are also called the "tableau", but more on that later. 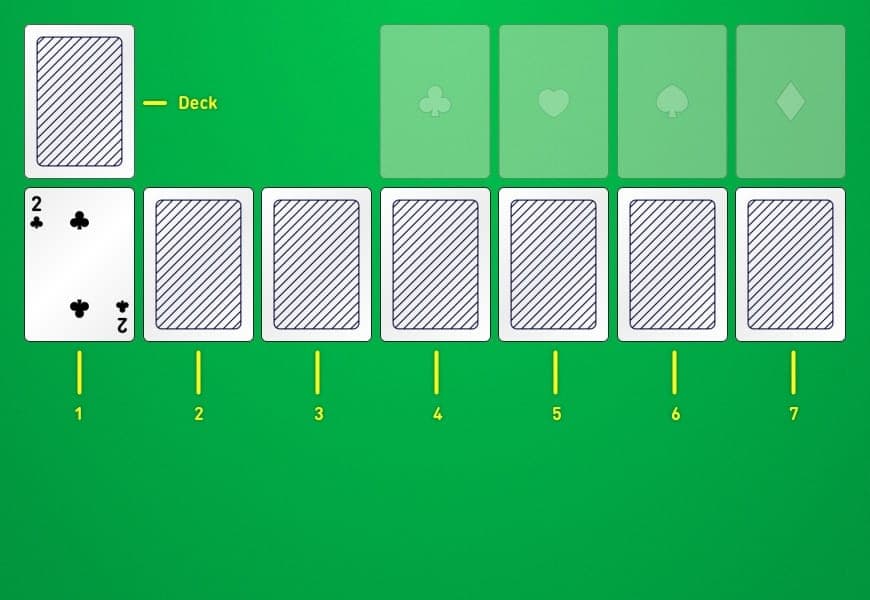 Step 2: Place a single card face-up on the second row and then deal five face-down cards on the remaining piles. I'm sure you're noticing a pattern emerge in the layout. To set up the remaining cards, follow the same pattern as before until there's a face-up card on all rows. 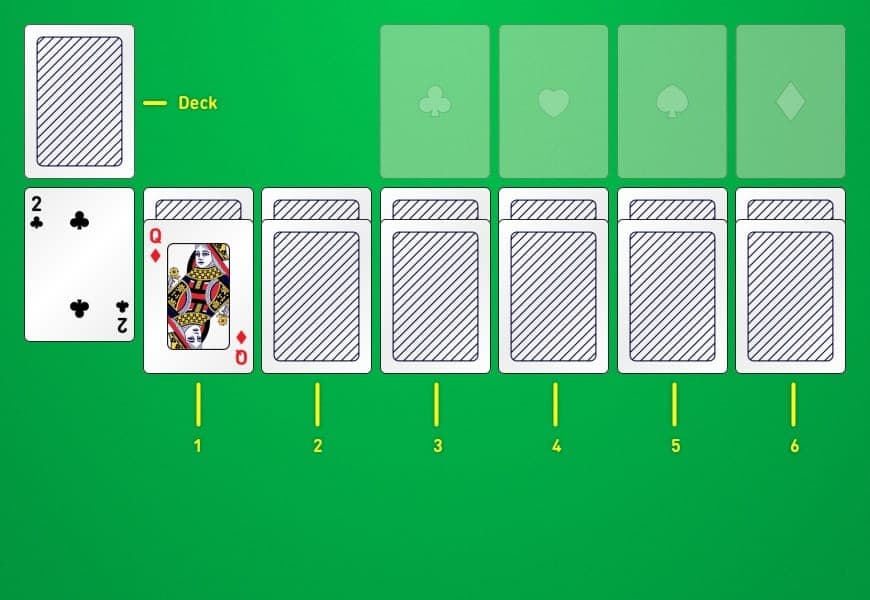 Step 3: Place the remainder of your deck above the first row. The rest of the cards are used in the game and will act as your "stock" pile. The seven rows should have a staircase pattern with the last card in each row facing up. The seven rows are also called the "tableau", which is where most of the gameplay will happen. 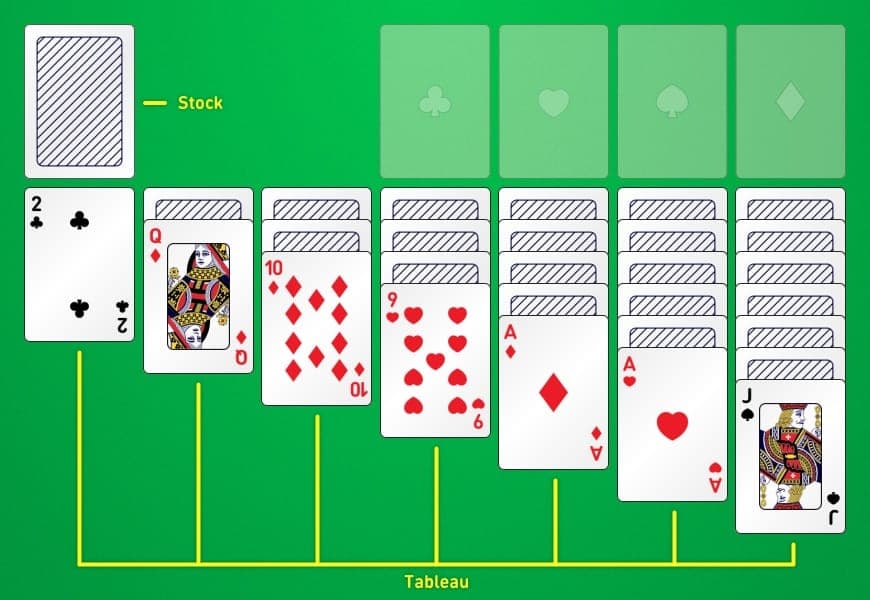 Step 4: Before getting into how to play the game, you'll need to leave room for your discard pile, also known as "waste" or "talon" pile. This pile is where you'll discard any cards you've drawn from your stock and can't use. The waste pile will start empty at the start of the game, but you'll use it continually throughout the game, so make sure you leave some space for it.

You'll also need to make room for your "foundation" piles. The foundation is used throughout the game as you get to clear cards from the tableau. They're also empty initially, so make sure you reserve some space for them. 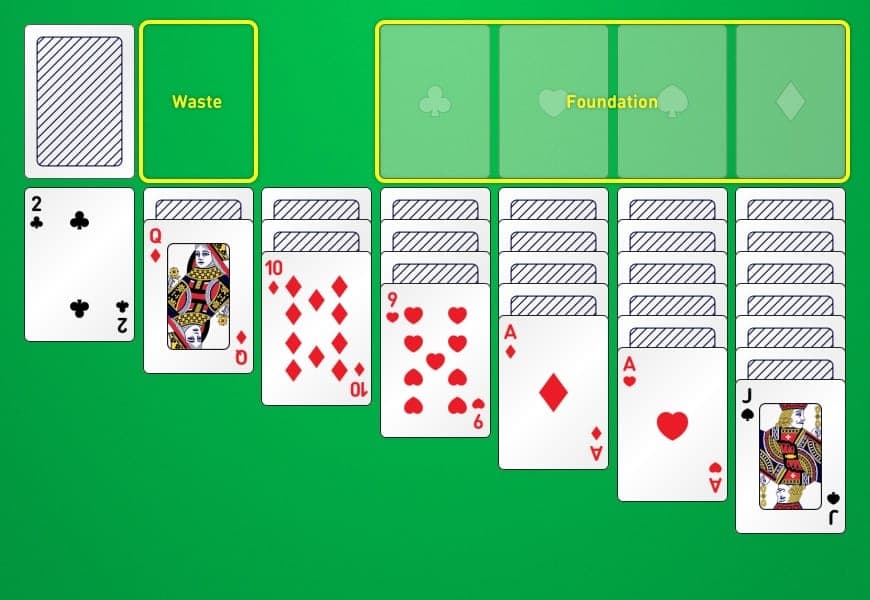 You've now setup the game, so let's learn the rules!

How To Play Solitaire

When beginning a new game, the first thing to look out for is if any top cards are aces. If they are, you can move them to the foundation straight away. 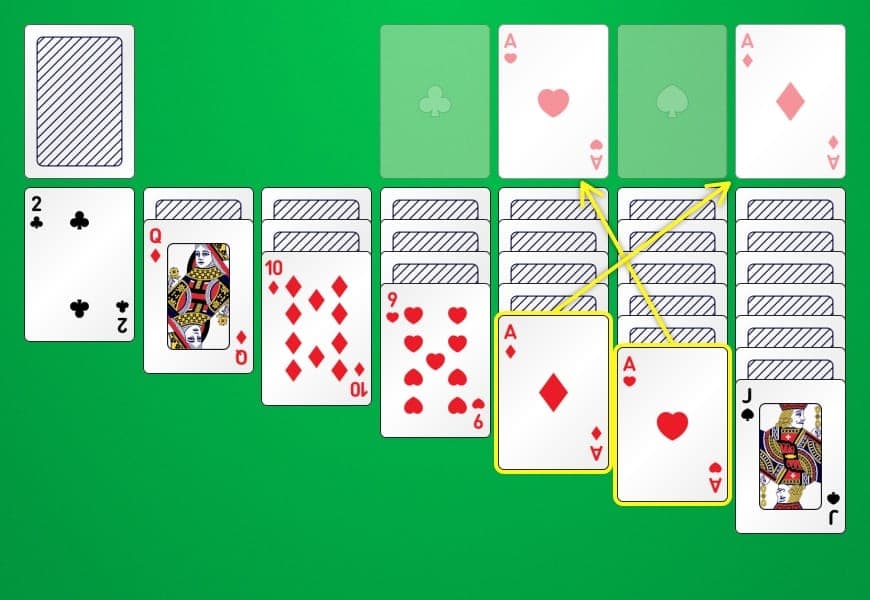 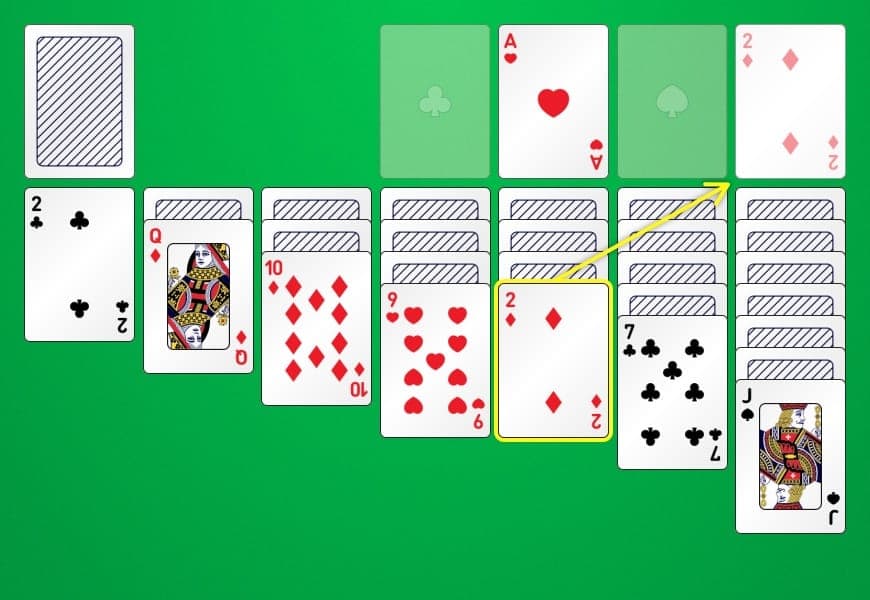 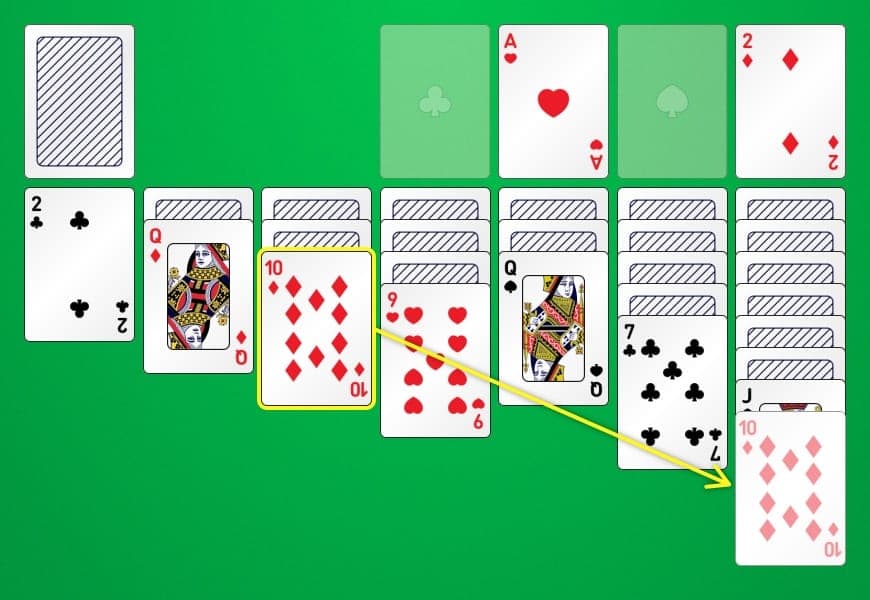 Step 4: You can also move several cards at a time, as long as the cards being moved are in descending order and alternating colors. Keep placing the cards on the tableau on top of each other until there are no more available moves. 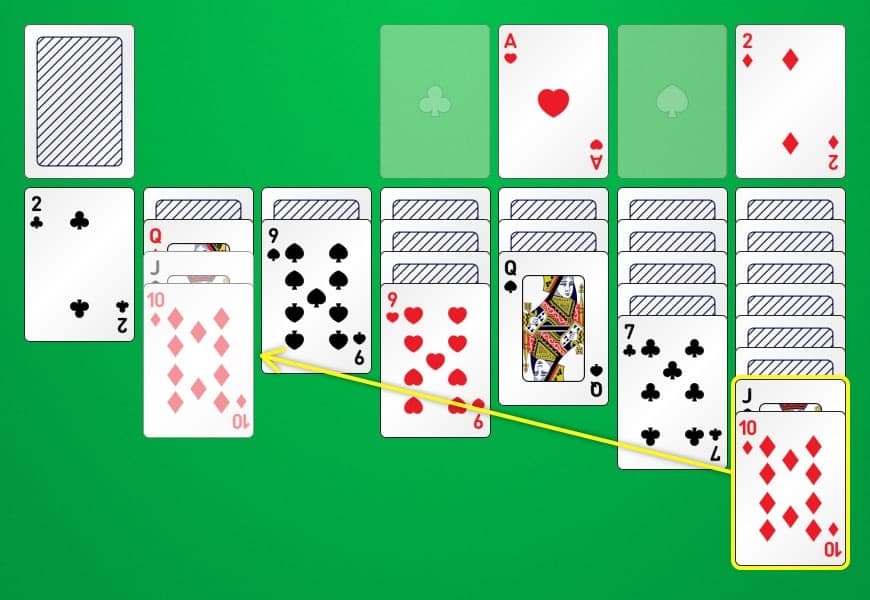 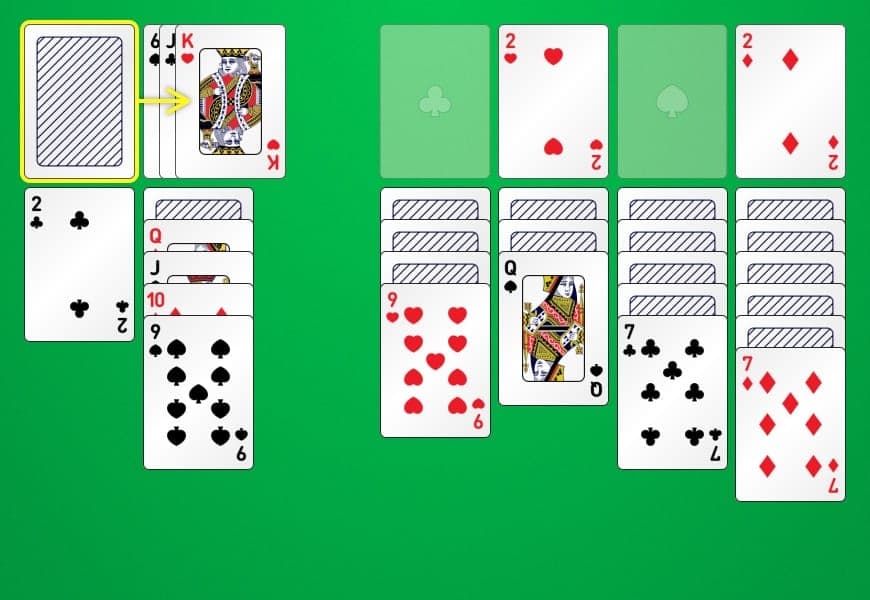 Step 6: The last rule you need to know about is how to start a new tableau. If there's an empty tableau, then you're allowed to move a king to it, but only a king! Once you're moved a king there, the tableau acts as any other tableau. 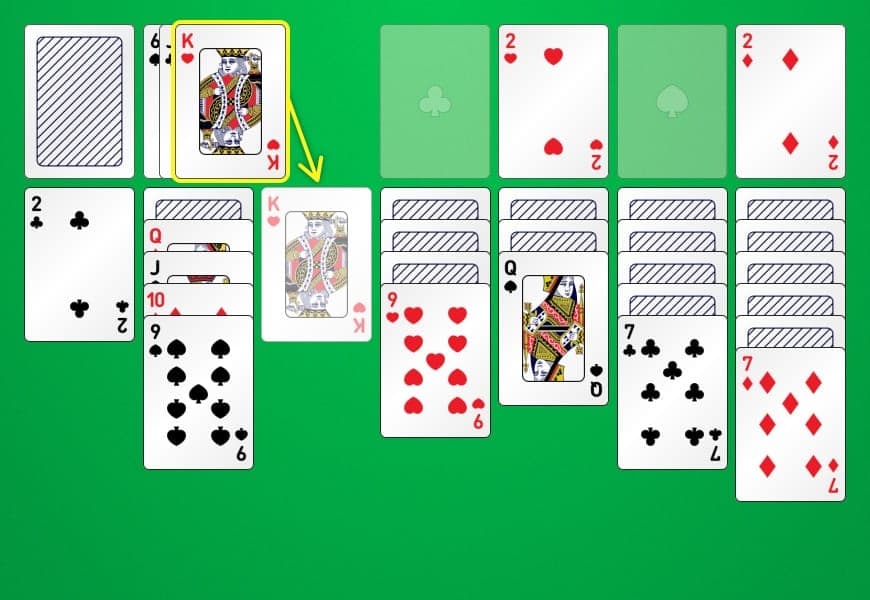 Step 7: All there's left to do now is repeat all the moves explained above until, knock on wood, you win the game, which means you'll end up with all the cards in the foundation piles. 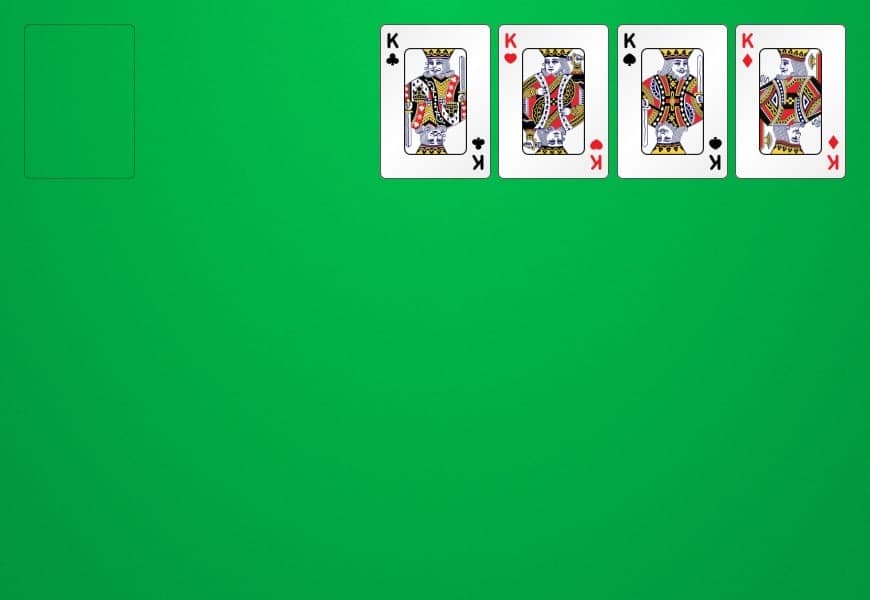 Create your own custom-built game containing your own logo and brand colors and implement it on your own website, blog, or WordPress page using a simple embed code. The add-on works as a plugin script, is ad-free forever, and contains no cookies, so no GDPR or cookie banners need to be added.

Do like many others and implement a fun widget on your site:

A Classic Game Jam-Packed With Features

Our game contains the gameplay you know and low from the classic Klondike card game, combined with all the bells and whistles a modern Patience game should have. It's jammed with features, and below you'll find some of our favorites.

You can play Klondike with turn one if you're in a mood for a simple round or turn three if you're up for a challenge. Play a random game for a classic experience, or try a winnable deal for a more predictable experience.

Start your day off the right way with our daily challenges. You're guaranteed to be able to win each daily challenge, so there are no excuses for missing a day! Keep track of your progress in the daily challenge calendar.

If you're unsure what your next move should be, you can always get a hint, which will help you move one step closer to winning the game.

If you're playing a winnable deal and get to a point where you're stuck, you might have made a wrong move. Don't worry, since you can undo as many moves as you want.

I have started my day playing the daily challenge for many, many years and still love it.

Klondike the way it should be. I love how it plays and the look of the cards.

If your questions aren't answered by our FAQ below, feel free to reach out at [email protected], and we'll do our best to help you.

We sure do! You can download this classic card game for free on Windows™, Mac™, Linux™, Android, or iOS. We even have a version for Amazon Kindle and Google Chrome as well.

What is the most popular patience game?

There are hundreds of different patience games, mostly card-based, but people tend to stick to a few select games. Since Microsoft started to package these famous card games in 1990 alongside Windows 3.0, Klondike Solitaire has stood out as people's favorite. Out of the 143m games played on this site, Klondike Solitaire accounts for a whopping 60%, and the numbers are about the same on similar sites.

How Do You Set Up Solitaire?

The tableau piles are numbered from one to seven. The first pile has one card on it, and the second has two, and so on. The top card on each tableau is turned face up, and the cards below are turned face down. The cards left after being moved to the tableau are placed face down on the stock. Both the waste and the foundations start without any cards on them.

How Many Rows Are There in Solitaire?

There are seven rows in a game of Klondike. These rows are also referred to as tableaus. They're laid out in a pattern resembling a reverse staircase, with each row having one more card than the last row.

What Is the Foundation in Solitaire?

How Do You Deal Solitaire?

How Do You Play Solitaire?

How Do You Win Solitaire?

How Does Scoring Work in Solitaire?

The scoring used is the traditional one used in the Microsoft Windows™ games. You can see a table of the scoring below: