Solitaire Guide: Tips on How to Win Solitaire

Solitaire has been a long-time favorite of people to keep their minds sharp. When the game was first created is not known, but we know that it's at least as old as Napolean, since he passed the time playing Solitaire when he was exiled to the island of Elba.

We've written this guide to teach you how to win at Solitaire, so without further ado, here are our top tips:

1. Learn how to play Solitaire

The first tip is not so much a tip as it is a prerequisite for getting good at Solitaire. It might have been a long time since you've played the game last, or you might never have fully understood the rules. Whatever the case is, learning the game is the first step to mastering the game.

3. Only empty a spot if you have a king

Only a king can fill an empty spot on the tableau, so if you move the last card on a tableau to another, you've basically just blocked the tableau. So before you empty a spot, make sure that you have a king to place on it, either on the tableau or in the stock.

4. Distribute piles across the tableau

Leaving the piles separated gives you a large choice of sets to build on, which is especially great when working through the card waste.

5. Only moves cards if you have a reason to do so

It might be tempting to build piles on the tableau, but doing so can actually be hurtful to the game. When doing so, you end up locking cards of different colors behind the pile, which makes you end up in a situation where you can't win a game because your cards are locked behind a pile. Our advice is only to move cards if it reveals a hidden card below or if you have a good reason for it.

6. Always turn over hidden cards after a move

This might seem like a no-brainer, and it's even done for you if you play online, but it's still worth mentioning. Some people make all their moves on the tableau and then turn over all the hidden cards they've revealed. Make sure always to turn over hidden cards after they've been revealed since it gives you extra options on what your next move should be.

8. Always play the Ace or Deuce if possible

Whenever you get a chance to move an Ace or Deuce (also called a two) to the foundation, make sure to do so. Those cards won't help you build stacks on the tableau but will block other piles. Moving these cards is so much of a no-brainer that it's considered one of the best moves in the game.

A good deal is a deal that gives you a high chance of winning. Not all deals are equally easy to win. Some deals can be won effortlessly, some will be hard to win, and some can't be won at all.

Games that are on the easier side tend to share a few attributes. They tend to have higher cards like aces and kings, they tend to have sequenced cards of alternating colors, and they tend not to have any duplicate cards of the same color. 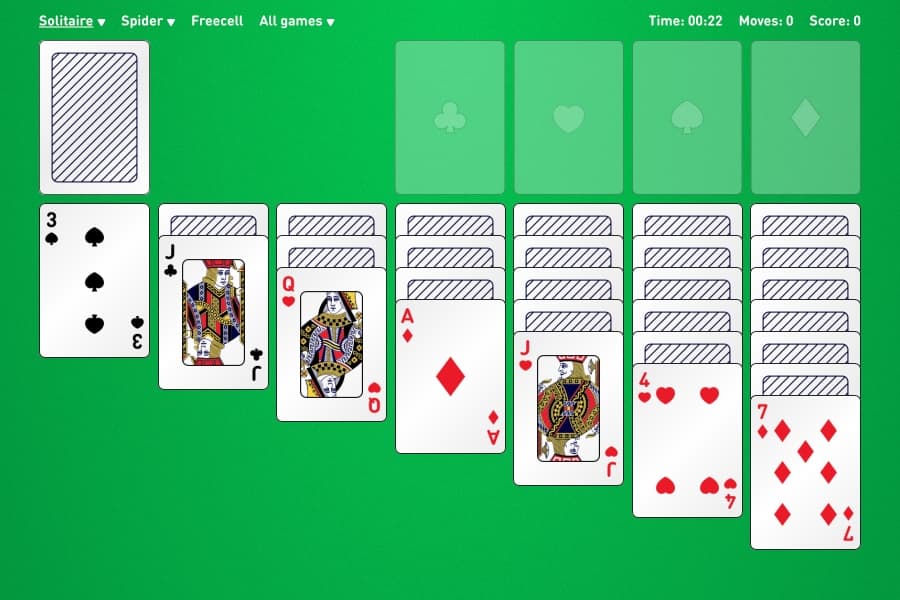 Just as you can be dealt games that are easily winnable, you can also be dealt games that are not so easily winnable. They might not be winnable no matter how much you try. Identifying these types of games can save you a lot of time. On the other hand, you might be the type of person who likes a challenge, which means you'll want to play these types of games.

Games that are on the harder/impossible side share certain attributes. They tend to have no kings or aces, no sequenced cards you can stack, and they might even have duplicate cards of the same color. A hard game might have just one of these attributes, but it might also have all of them. The more of these attributes a game has, the harder it'll be. 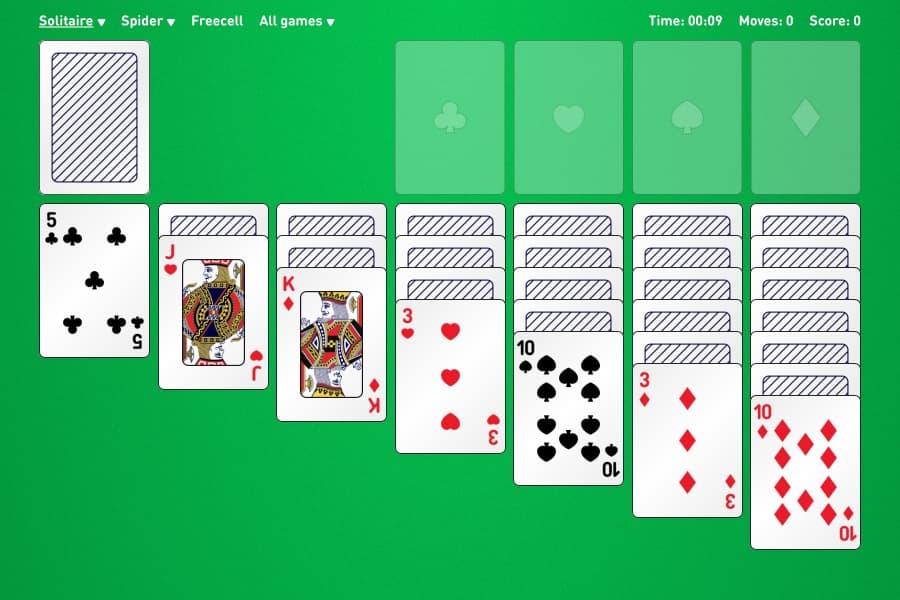 Above you see an example of such a game. You have two Threes in the same color, there are no aces, and on top of that, there are no cards that can be stacked. A game like this might still be solvable, but it's definitely harder than other games.

Congratulations on going through all of our tips and tricks. You now have a much better chance at winning Solitaire. If you have any feedback or if you have a tip that you feel should be added to the list, feel free to write us at [email protected]. For now, why not play a game of Solitaire to try out your new solitaire strategies.